„I peed myself laughing,” we say often. However, such a reaction to a told joke may be a symptom of a serious ailment. If somebody “wets oneself” while coughing, sneezing or carrying shopping, it means that the person has suffered from stress urinary incontinence. The easiest way to deal with this unpleasant and depressing ailment is treatment with the use of a preparation called Bulkamid. 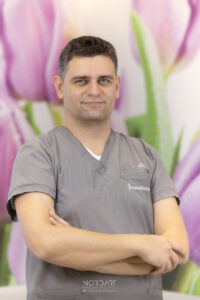 * Urinary incontinence is a serious condition, but women most often think that it just must be so. – They are convinced that nothing can be done about it. Nothing could be more wrong – says doctor Marek Kwiecień, specialist in gynaecology and obstetrics

* One of the patients of the gynaecologist struggled with urinary incontinence for 25 years. She practically did not leave the house and she did not meet her family. After the surgery, she went on holiday almost immediately.

* Most patients who cannot control their own bladder think: „The less I drink, the less will overflow.” And this causes chronic dehydration of the body that is dangerous to health

* Although the statistics on urinary incontinence are divergent, it is estimated that over 300 million women worldwide have to deal with the problem, including one in four Poles

Your medical experience shows that the problem of urinary incontinence is so common?

Doctor Marek Kwiecień, specialist in gynaecology and obstetrics: I would add that the percentage of people suffering from urinary incontinence can be much higher. For many women it is so embarrassing that they do not tell doctors about their problems, which makes it difficult to collect reliable statistical data. And the scale of the disease is shown, for example, by pharmacy shelves full of underlays, inserts and diapers to help maintain hygiene. Interestingly, the cost of reimbursement of these dressings is greater than the cost of reimbursement of drugs for hypertension and diabetes combined.

Do you think it is reasonable to say that urinary incontinence is a social problem?

Absolutely, for at least a few reasons. The disease causes many dysfunctions, changes the behaviour of people who stop living as they would like. Due to urinary incontinence, they are forced, for example, to change their place of residence or work. Sometimes they give up their professional activity altogether.

What else, apart from the shame, is it that women do not seek the help of specialists?

The sad truth is that this is the result of ignorance. Most women are unaware that urinary incontinence is a serious health problem. Usually, their reflection is limited to the conviction that it must be this way, that they are doomed to do so. In my office, I see patients who consider uncontrolled leakage of urine to be something completely natural and simply due to age, nature and physiology. Moreover, they are convinced that nothing can be done about it. But it is equally disturbing that not all doctors, including gynaecologists, do not ask their patients if they have a problem with urinary incontinence. And in a medical interview or during a gynaecological examination, such a question should definitely be asked. If not, it could be considered medical negligence.

How can we explain what incontinence disease actually is?

Simply put, it is an uncontrolled leak of urine. It takes place against our will and at times when we do not plan it. It should be noted, however, that we distinguish several types of this ailment. The most common is stress urinary incontinence. This means that when we make any effort, the intra-abdominal pressure changes, and the result is uncontrolled emptying of the bladder.

In what other situations do we not control urination?

Even while laughing. There is a reason for the saying „I peed myself laughing”. And it is not a random description of a reaction to a funny situation or a joke overheard. Coughing, sneezing or playing with your baby can also result in urine leakage. Young mothers in particular complain of this ailment, complaining that they cannot play with their children as they would like, for example by jumping on trampolines that are so fashionable today. But all these urine leakages are the least advanced problems.

What are the more dangerous ones?

When we make even the slightest movement. I have come across a case in which a patient had urinary incontinence to such an extent that even at night, when she was asleep, when she was rolling from side to side, she would get uncontrolled wetting the bed. In extreme situations, even raising your hand can empty the bladder completely. It is easy to imagine that the daily functioning of people with such drastic manifestations is highly uncomfortable.

Such patients try to save themselves from involuntary emptying of the bladder?

Most of them trigger a mental mechanism: „The less I drink, the less will overflow.” So they limit the consumption of any drinks, which in turn leads to dangerous, chronic dehydration of the body. Let’s not forget that many patients suffer from other illnesses, so they take medications that have diuretics or thicken the blood. And this increases the risk of stroke or heart attack.

Yes, especially in multiparous women. Natural childbirth increases this risk, because the reproductive organ is often injured. Having a baby, means, after all, having a large and hard structure going through the birth paths. This causes the muscles to stretch, relax, or even tear. Therefore, women prefer to give birth by Caesarean section, especially if they already have the first symptoms of urinary incontinence and are concerned about the worsening of this condition. Although „caesarean section” does not always guarantee that the condition will not worsen, it can actually reduce the chance of incontinence or progression. But it should be emphasized that urinary incontinence is associated not only with childbirth: as the years go by, a woman’s hormonal balance changes and her muscles weaken. And yet, they surround the urethra in the pelvic floor.

When they are weak and inefficient, they cannot retain urine in the bladder?

Yes, but it’s also worth knowing that women do not have the same anatomical structure as the urethral sphincter. Only men have it. Urinary retention in women is based on three pillars: the pelvic floor muscles, the fascia system, i.e. the suspending – restraining – compressing structures, and the wrinkled urethra, whose cross-section resembles an asterisk. These folds seal the urethra of healthy women.

How is urinary incontinence treated?

In this regard, the guidelines of the Polish Society of Urogynaecology apply    . This organization does not recommend supplementation drugs or laser therapy. Mainly because there is no evidence that these methods are effective. We also do not know if the complications of this type of therapy will not worsen. On the other hand, PTU recommends physiotherapy, but only when the ailment is slightly advanced. However, in more intense manifestations, Kegel muscle training and electrostimulation under the supervision of a specialist may not be enough.

Then is a surgical intervention needed?

Yes. The most common procedure is to insert a special tape under the urethra. All this to lift and support it. The procedure requires incision of the vaginal tissues, and the rehabilitation period is quite long, lasting about 6 weeks. This so-called, loop surgery may be associated with complications: urinary tract infection, bleeding or erosion of the tape to the bladder or to the vagina. However, in my urogynaecological practice, I use a different, much less invasive, innovative treatment for stress urinary incontinence.

What is this procedure?

The method involves the use of a preparation called Bulkamid. It is a special filler that has the form of a thick gel and is applied for the soft tissues of the urethra. Unlike other fillers used in medicine, such as hyaluronic acid, Bulkamid does not undergo any resorption over time, and therefore it is not absorbed. Equally important, it is bio-neutral: it consists of water and a polymer called polyacrylamide.

Exactly. In detail, the procedure is performed in such a way that I „enter” the urethra with a microcamera. Then, with a thin needle, I apply the preparation to the appropriate points of the urethra.  Imagine the urethra as a clock face and the 8, 10, 2, 4 o’clock position on it. We inject Bulkamid in these places. This causes the urethra to wrinkle again, so that it is no longer smooth like a garden hose, but rather pleated. And thus – sealed, which in turn allows for controlled urination. Most importantly: once administered, Bulkamid will be effective in preventing uncontrolled urination for many years.

How do patients react, thanks to this method, they are able to control their bladder?

Most of all, they feel tremendously relieved. I remember an older, over 80-year-old patient who practically gave up her life due to urinary incontinence. She stayed home and rarely visited or hosted her family. She was aware that it might smell bad, and she spent her days mostly changing the diapers.

Has she struggled with stress urinary incontinence for a long time?

Imagine that it lasted 25 years. Eventually, the family decided to intervene and persuaded her to undergo surgery. So we used Bulkamid and the patient went home on the same day. In our hospital, she had to wait two more hours and go to the toilet to urinate. This is a mandatory part of our procedure. But the very next day, she informed us that her life had changed completely and she was back in shape she was before stress urinary incontinence. And a week after the surgery, during a routine check-up, she announced with joy that after many years of imprisonment in her own home, she had just bought a holiday by the sea.