Hypothyroidism- how to diagnose it? Is the treatment always recommended?

Homepage»O nas»Advice»Hypothyroidism- how to diagnose it? Is the treatment always recommended?

Hypothyroidism- how to diagnose it? Is the treatment always recommended? 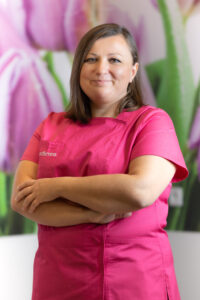 Hypothyroidism is a condition characterized by insufficient secretion of thyroid hormones. Overt hypothyroidism produces symptoms that are hard to miss.  Patients complain of slowness, impaired concentration, fatigue, drowsiness, dry, thickening and peeling skin, hoarseness, easily feeling cold, persistent constipation, flatulence, sometimes weight gain, and depressive symptoms.  Observed symptoms observed include hypertension, bradycardia, more rapid development of ischaemic heart disease, in extreme cases symptoms of circulatory failure, lipid and carbohydrate metabolism disorders.  In women, the menstrual cycle is disturbed and there are difficulties in getting pregnant, and the course of the pregnancy itself is abnormal. The general development of children is impaired, especially their intellectual abilities are reduced, which affects their whole future life.

Before the development of full-blown hypothyroidism, the subclinical form is usually present, which changes into the overt form every year in 2.5-5% of patients. The subclinical form does not produce such suggestive symptoms as those mentioned above. However, you may notice a greater tendency to fatigue and various forms of symptoms of full-blown hypothyroidism, which are sometimes difficult to see because of the slow progression of the disease.

The cause of hypothyroidism in 99% of cases is damage to the gland itself caused by:

-Hashimoto’s disease and its variants (including postpartum thyroiditis)

– iatrogenic causes (condition after removal of the thyroid gland, treatment with 131J, irradiation of the thyroid gland in patients after head and neck radiotherapy, the use of drugs: thyrostatic drugs, lithium salts, alpha interferon, amiodarone, tyrosine kinase inhibitors)

Much less frequently (1% of cases) secondary hypothyroidism develops as a result of insufficient stimulation of the thyroid gland to secrete hormones due to damage to the pituitary gland. This situation occurs in the presence of tumours in the pituitary and hypothalamus, after neurosurgical operations or irradiation, after a head injury, in diseases with CNS infiltration, in the case of pituitary ischaemia (postpartum, after hypovolemic shock, in diabetes) and in other cases.  Symptoms of secondary hypothyroidism are less pronounced and coexist with other symptoms of pituitary hormone deficiency.

In Poland, due to iodine prophylaxis (iodization of table salt and milk), hypothyroidism is very rarely diagnosed due to iodine deficiency. It occurs in extreme situations (elimination diets, nutritional deficiencies). Hypothyroidism may also occur in the case of an excessive intake of iodine (using the so-called alternative methods of treatment on your own, various types of supplements) or as a result of the use of drugs containing a high dose of this element, such as amiodarone.

Since the vast majority of cases of hypothyroidism involve damage to the gland itself, diagnostics should be carried out in this aspect in the first place. Usually, autoimmune thyroiditis (Hashimoto’s disease) or iatrogenic causes are found after radioiodine treatment or after thyroid surgery.

In the diagnosis of hypothyroidism, in addition to assessing the patient’s condition and carefully conducted interview, laboratory and imaging tests include:

In primary, overt hypothyroidism, we observe low levels of peripheral hormones (fT4, fT3) and an increased concentration of TSH. Hashimoto’s disease is also characterized by an increased titre of anti-TPO antibodies and an ultrasound image of the thyroid gland (with heterogeneous echostructure of the gland, decreased echogenicity of the parenchyma, and areas of infiltration and fibrosis in advanced cases).

In subclinical hypothyroidism, peripheral hormone levels remain normal (rather in the lower registers of normal), while TSH levels are higher, but not as high as in overt hypothyroidism.

All cases of overt hypothyroidism and selected cases of subclinical hypothyroidism require treatment (when TSH> 10 is found, high titre of antibodies, goiter, the presence of risk factors for the development of cardiovascular diseases, in women planning pregnancy or during pregnancy, with severe subjective symptoms). Treatment involves supplementing hormonal deficiencies. Levothyroxine (Euthyrox, Letrox) is used, less commonly liothyronine. The treatment regimen is simple, as a rule, in one daily dose, in the morning on an empty stomach. A liquid preparation of levothyroxine is available (for use in people with malabsorption disorders, in children or, if desired, in other patients).  The dose of the drug is selected individually based on the results of the follow-up tests. Optimal treatment of pregnant women is extremely important, during which iodine supplementation in an appropriate dose is necessary (iodine in a dose of 150-200 µg is contained in vitamin preparations intended for pregnant women). The correct hormonal balance during pregnancy prevents disorders of the nervous system in the foetus – it creates the most favourable conditions for brain development and normal growth and development.

The effectiveness of treatment is assessed by laboratory tests-hormone concentrations. Once adequate control is achieved, testing is repeated every 6-8 months.  During pregnancy, checks are done at regular monthly intervals. Postpartum hormonal reassessment and appropriate adjustment of medication doses is necessary.

In Poland, all newborns are screened for thyroid function – blood for tests is taken from the heel in the first days of life. If any irregularities are found, the parent is immediately notified of further action. This ensures that appropriate treatment is implemented quickly and minimizes the risk of abnormal infant development.